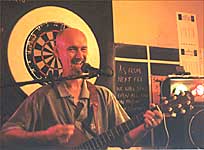 One of the most versatile guitarist / vocalists you will hear. Martin John is a classically trained guitar player, and can play in a huge variety of styles, everything from Classical, through Flamenco to Pop and then out the other side to Rock.

Some of Martin's achievements include writing a classical style piece for a play (The Fisherwomen Of Black Tar) which was aired on Radio 4 in January 2003. As well as, more recently, writing and performing the sound track for the plays "Tess of the D'Urbervilles" and "Dracula". He's just finished the incidental music for the latest Severn Area Rescue Association promotional video, which he also produced.

His trademark acoustic guitar does not limit his playing style in any way. With it he can produce authentic rock sounds, including Brian May riffs, right through to the most delicate folk guitar. He plays with passion and sensitivity.

He regularly tours abroad including regular visits to both Europe and America. He featured prominently at La Fete De La Musique in Tours, France for a number of years. He's playing a number of festivals in the southern states of America (ending in Bristol, Virginia as he did last year) in September 2006.

He was the lead guitar player for Chantilly Lace, Stretch and Barry McCloud & the Bounty Hunters before he struck out on his own. More recently he's been stunning audiences as the lead guitarist for the Snake Pliskin Quintet who have performed at Priddy Folk Festival.

Martin has been playing the circuit for many years. He's a great entertainer and a thoroughly professional performer. He's also been writing and performing his own original music, embracing a wide variety of styles from classical guitar pieces through folk songs and out into Latin influenced numbers.

Martin gigs most weekends performing covers in local pubs, clubs and restaurants. He also supports a selection of open mic nights and folk clubs in and around Bristol. He was one of the organizers and booked acts at the second Bristol Acoustic Roots Singer Songwriter Festival where he featured.at Mr Wolfs, at Sound Control and on the BARSS stage.


You can buy his music using paypal here.